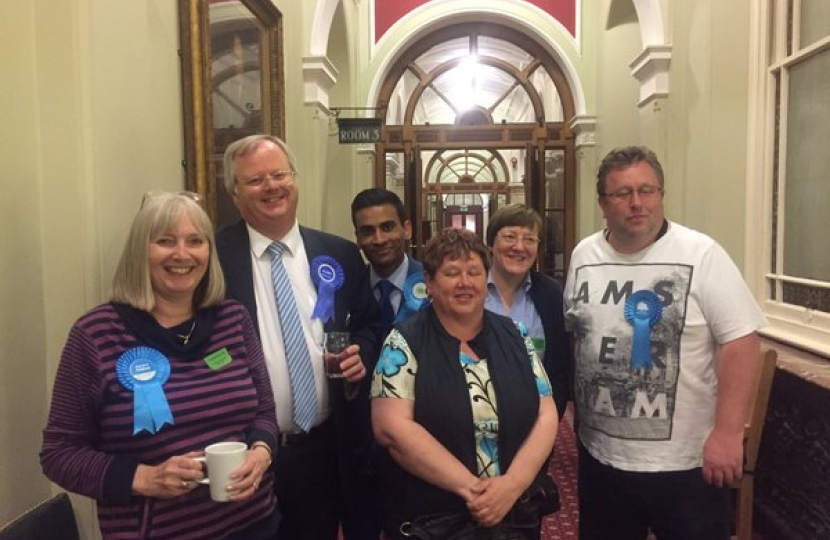 As is often the case, Local Election Night was a night of mixed emotions for The Edgbaston Conservative Association. Longstanding Councillor Deirdre Alden was re-elected to her seat of Edgbaston Ward in a closely fought election whilst Council newcomer Des Flood, an Assistant Head Teacher in Bartley Green, was elected. It was less successful for our hard working candidates from Quinton and Harborne however.

Deirdre will continue into her 18th year of unbroken Council service, having first been elected in 1999. She has served as the Shadow Cabinet Member for Sustainability in the last opposition team as well as sitting on the Standards Committee. Her wise head and experience will be of great value in the years to come. Des, a popular member of the Bartley Green community, will be hoping to build on the successes of his predecessor Vivian Barton, who stood down at the election. Alongside John and Bruce Lines he will be a safe pair of hands.

Georgina Chandler, our Quinton candidate, fought a strong campaign, demonstrating perseverance and tenacity. Supported by a small but dedicated group of volunteers and her agent Alain Hurst she has devoted a great deal of her time and energy to the people of Quinton. This was Georgina's second time standing for election in Quinton Ward, having previously been the candidate in 2015. In the space of a year she has almost halved the Labour majority from 1144 to 601 votes. Georgina should be rightly proud of her achievements and it is only a matter of time before she contributes at the Council table.

In Harborne, local barrister, Akaal Sidhu also reduced the Labour majority from 538 votes to 437. This was Akaal's first attempt at election to the Council House but he has solid campaigning experience having been Les Jones' running mate in the 2014 Police and Crime Commissioner election. There were high hopes of returning a second Conservative councillor to Harborne this time round but sadly it was not to be. Akaal, along with his agent Lord Whitby, fought a focused campaign and fostered links with communities previously not seen as natural Conservative voters. The dedicated work they have done will stand Harborne in good stead for the next Local Elections.